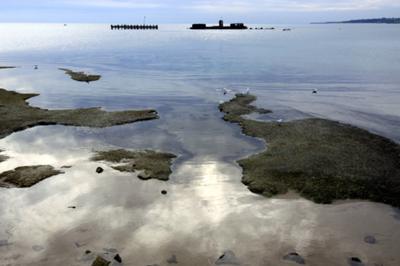 The story behind this image began some sixty years ago.

Winter Reflections was captured at Half Moon Bay, Black Rock, a suburb some twenty kilometres or twelve miles south of Melbourne CBD.

I was born in Black Rock and grew up living only a few houses away from the beach. I spent many happy days playing on the sand and rocky outcrops as a child. I loved the area so much I chose to raise my own family there too and still live in the area to this day.

This image depicts the lovely reflecions on the water in early winter 2009. The afternoon sun and the low tide combined to create a lovely tranquil setting. The sea birds also can be seen feeding on the variety of food exposed by the calm waters.

In the background can be seen the rusting hulk of the HMVS Cerberus whick was sunk as a breakwater in 1926.
The Cerberus was australia's first iron clad warship and arrived in Port Phillip Bay in April 1871 to protect the port of Melbourne from invasion during the gold rush era. She never fired a shot in anger and remained in the bay until she was decommissioned and now used as a breakwater.

Join in and write your own page! It's easy to do. How? Simply click here to return to Photography Techniques.